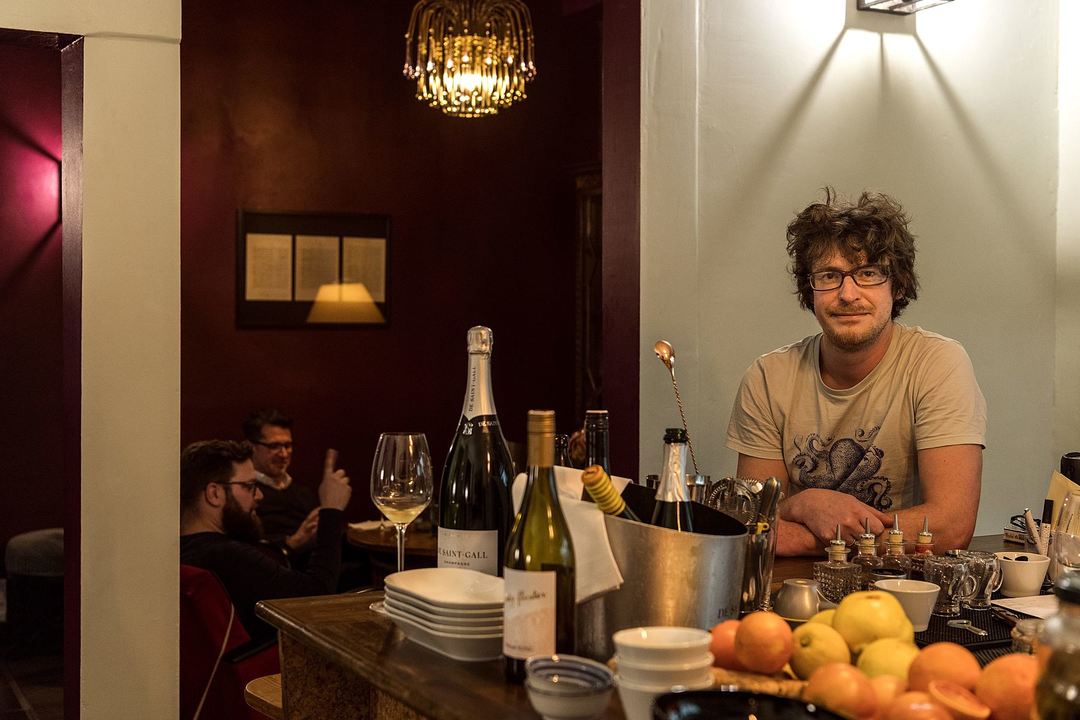 ... what comes on the table

You can't really see it. A door, two windows, both covered, no sign, no name, engraved "In Homines Animalis Welfare" into the frosted glass of the entrance door - and it's very small, although it wouldn't be much more explanatory if it were much bigger. There is no place you pass by and think: Hey nice, I'll just drop in and have something to eat. It's a place you just pass by.
"I still don't cook faster," says Patrick Sowa explaining his camouflage principle. A maximum of ten people can fit into his establishment, which opened at the end of last year, and there should be ten people who can cope with the fact that he simply cooks a few things and puts them on the table one after the other.
What there is is neither on the menu (it just says that three courses cost € 36.90, each additional € 10.80) nor on the website, because there is no such thing, i.e. maximum uncertainty, counteracted only by the hunch that it will probably be as good as what the Carinthian-born man, who came to Vienna 15 years ago as a street musician, cooked in counterpoint, in the Mormat in 1070 or briefly in the R&B bar: lots of fish, lots of vegetables, likes to fuse together, exceptionally good. But you don't really know.
Patrick Sowa found his restaurant, which you could call whatever you want, as he says, last year on Willhaben and had a week to decide whether he really wanted to do his first own restaurant in a former Thai snack bar in a dark side street in Outer Neubau or rather something in the east of Germany, which was actually the plan until then.
Seidengasse won, and although the Sowa method is now in no way in keeping with Viennese custom, the hut is full every day. One needs luck to get a seat at one of the three tables in the open kitchen or at the table in a kind of DJ-lounge anteroom, if necessary one sits at the bar.
You can also watch him sauté the fillets of the small red mullet and bed it on wafer-thin slices of courgette with green tomato chutney, soft, light, fresh, wonderful. Then come raw prawns with raw tuna on radish marinated in mayonnaise, delicious, the fried pork belly is also cut very thin and arranged with chard kimchi, pumpkin seed oil and pumpkin seeds, great. Then a lentil dish, which Sowa neatly freshened up with miso, bonito flakes and mussel squid soup Umamii-style, and on which he placed a poached egg, super, and then three pieces of pink roasted saddle of beef with melanzani cherry tomato and garlic melt, Oida.
A risk, at any rate, which one can take with pleasure and without further ado.
Résumé:
It is hard to find the restaurant, you only get a place with luck and you don't know what you will get. And then that's great.