Important note regarding COVID-19: Due to the current situation, events are cancelled, museums, cinemas and restaurants are closed. Please directly contact the location for further details. 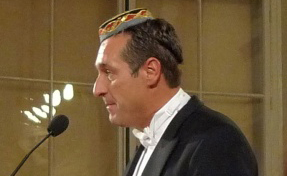 It was 27 Jan. – the day that people across the West commemorated the liberation of Auschwitz by Soviet troops. This year, it was also the day that the Wiener Korporationsring (WKR), an association of German-nationalist student fraternities, held its annual ball at the Hofburg, Austria’s historical seat of power.

The coincidence, the organisers claimed, was accidental. Indeed, other balls were taking place that night, but received little attention. This was because the WKR Ball is a perverse highlight in Vienna’s ball season, every year attracting scores of protesters opposing the fraternities’ supposedly racist ideals – and their political influence via the Freedom Party, FPÖ. This year’s unfortunate timing simply amplified the dissent, drawing some 3,000 protesters to a rally on Heldenplatz, while break-away groups roamed the inner city, blocking roads to stop taxis and guests from reaching the ball.

But does the nationalist frat party deserve all this attention? Is the WKR Ball really "a gathering of Holocaust-deniers, right-wing extremists, and neo-Nazis," as the president of Vienna’s Jewish Community, Ariel Muzikant, claimed at a press conference in December?

And do the nationalist student corporations indeed have the political influence they are credited with?

The white-washed Josephsplatz stood empty apart from a single, illuminated corner. It was the calm eye of the storm as 1,300 riot police had sectioned off a generous part of the Innenstadt behind the Hofburg. Two men in dark capes stood guarding the inconspicuous side entrance to the imperial palace.

Through a long, white corridor we reached the actual entrance hall, dominated by a marble staircase. The strains of a string quartet provided relief from the helicopter noise outside.

But the atmosphere was aimless, almost depressed. At 21:30, half an hour after the opening ceremony was scheduled, the débutantes were still lined up outside the grand ballroom. "We don’t know when it will start," a blonde 16 year-old dressed in the customary white said nervously.

Everybody seemed to agree who was to blame for the delay. "There is a lot of ignorance," a German guest in his late 60s ventured to explain the protests. "Do you see any Nazis here? I don’t. Sure, there will be few idiots, but you can find those everywhere." With a smile, he directed us to the front of the platform next to the orchestra where we had a view over the packed ballroom.

Men and women of all ages were jostling to get close to the parquet for the opening ceremony. Table booths lining the sides were hung with burgundy draping, and the stage was enveloped by a display of tropical flowers.

Yet the colonial-style décor clashed with the male guests’ Romantic revivalism: The crowd was shot through with young men in braided, velvet jackets and tights, some wearing knee-high boots and colourful, plumed berets. Occasionally, fencing foils dangled at their sides, while the swords’ traces were inscribed in many a face. Scarification on cheek, head, or chest – the so-called Schmiss – is a classic initiation rite in some fraternities.

While most men were wearing black or white tie, nearly all had laced their evening costumes with fraternity insignia: discreet, coloured ribbons or sashes, and the signature element of German fraternities – the flat cap with a short rim, the colours identifying the wearer’s "corporation".

In popular belief, the caps and scars signal membership in a right-wing Burschenschaft. But the truth is more complex. Insiders refer to a spectrum of corporations ranging from "liberal" to "nationalist". While Burschenschaften form the right-wing extreme, Corps, Sängerschaften (choirs), Landsmannschaften (countryman associations), or Turnvereine (athletic clubs) tend to be more tolerant and less political, emphasising their role as drinking clubs and professional networks. Collectively, Austrian corporations have about 4,000 members, according to Heribert Schiedel from the Documentation Archive of the Austrian Resistance (DÖW), an institute researching the Nazi period and current right-wing extremism.

The tension between liberalism and nationalism goes back to fraternities’ origins in the early 19th century, when membership was essential for university students’ later professional success. Fraternities were anti-monarchist, insisting on the freedom of assembly in the face of royal surveillance and censorship. To this day, corporations in Austria and Germany point to their academic and liberal roots to fend off accusations of Nazism.

Yet from the outset, liberal ideals mingled with Romantic notions of the organic unity of German-speaking peoples, breeding ideas of racial purity. "From the beginning, anti-Semitism was part of their ideology," explained Schiedel. "In most cases, only ‘German Christians’ were allowed to join."

Even today, fraternity members have this pan-Germanic culture in mind when they speak of the nation, not the political constructions of Germany or Austria. Thus, hanging from a balcony next to the stage, an incongruous flag draped the Habsburg ball room: the black-red-and-gold standard of German unity.

Austrian Burschenschaften have been particularly keen to display their German-ness. In the 1930s, they acted as cover organisations for the National Socialist Party, which was outlawed in Austria until February 1938. "The elite of the illegal Austrian NSDAP mostly consisted of Burschenschafter," highlighted Schiedel. A hang-over remained: In 1965, fraternity men rioted during a demonstration against an anti-Semitic professor at the University of Vienna, killing the 67-year-old concentration camp survivor Ernst Kirchweger.

Today, the umbrella organisation WKR is again dominated by extreme right fraternities such as Olympia or Cimbria. "Tendencies of innovation and moderation are viewed as treason due to the radical nature of German nationalism in Austria," Schiedel explained. For instance, Corps Hellas left the WKR, voluntarily as they say, because of a row over the Corps’ admission of a member with a Turkish background.

Most importantly, Austria’s right-wing fraternities have gained disproportional political influence via the FPÖ. Fraternity "old boys" make up 12 of the FPÖ’s 34 MPs, according to the daily Kurier, and hold key positions in the party. Notably, the FPÖ’s designated president in the National Assembly, Martin Graf, is a member of Olympia. He has repeatedly advocated the abolition of Austria’s Verbotsgesetz, which punishes the denial or belittling of the Holocaust. According to Schiedel, "fraternities provide the link between the party-based, right-wing populism of the FPÖ on the one hand, and (often organised) neo-Nazi groups on the other."

The FPÖ’s leader, Heinz Christian Strache, is himself an old boy of the Burschenschaft Vandalia’s high school branch. But his party’s reliance on fraternities is grounded in more than personal ties. When the popular leader Jörg Haider left the FPÖ in 2005 to found his Alliance for Austria’s Future (BZÖ), the fraternities helped re-build the party under Strache’s leadership. "Without [their] help, the FPÖ probably would not have survived," Schiedel noted. Now, Strache was repaying his political debts. In 2011, he reinstated a clause in the party programme that Haider had ditched: the FPÖ’s commitment to the "community of the German people" (Deutsche Volksgemeinschaft).

"We are decent democrats and we stand by our fatherland, our constitution, and… law and order," Strache exclaimed in his opening speech at the ball, a sky blue fez tilted on his forehead. His words highlighted the fraternities’ uneasy marriage of liberalism and nationalism. "The scandalous situation outside on the streets shows clearly… where the true threats to democracy lie: in the out-of-control forces of so-called political correctness, the… prophecies of multi-culturalism, and the violent extreme left."

Somewhere in the audience, Strache’s European allies may have been nodding: Philip Claeys from Belgium’s right-wing Vlaams Belang, Kent Ekeroth of the Swedish Democrats, and Marine Le Pen, who inherited the leadership of the French nationalist party Front National from her firebrand father, Jean-Marie, were all reportedly in attendance.

"Strache deliberately turned the ball into a political event by making it a meeting of the European Right," explained Nina Horaczek, co-author of an unauthorised biography of the FPÖ leader. "Nobody was interested in the ball until he invited [Jean-Marie] Le Pen and [Frank] Vanhecke from Vlaams Belang in 2008. That’s when the protests started."

Yet Strache’s appropriation of the WKR Ball for the political Right not only faced resistance from protesters. During his speech, a German guest nearby snorted "Zahntechniker!", highlighting at once Strache’s former career as a dental technician and his lack of a university degree.

In Germany, fraternities tend to emphasise their academic heritage over their political one. "Can’t we celebrate German culture without it being political?" a young man named Martin shouted over the music in the dim-lit, basement disco. A member of a Turnverein in Munich, the engineering student had come with his girlfriend to experience a traditional Viennese ball. Suspicious of questions, Martin only expressed his opinions in debate. "Why shouldn’t foreigners be able to join corporations?" he said. "We should celebrate German culture inclusively." So, immigrants ought to assimilate? "Not necessarily. I like to eat Weisswurst, others like to eat Döner. We shouldn’t be afraid of diversity and competition; that’s capitalism!"

These were the words of a liberal conservative. Indeed, when asked whether he was politically right-wing, Martin shot back "No! God forbid!" He had joined his corporation to "preserve German Lieder, yes, but mainly for the life-long friendships and the academic support."

In the end, a young "Olympian" best summed up the scene. "When choosing a fraternity, you have to know what you want. Some are mainly into social gatherings, some mainly into fencing, and others are interested in politics – like ours." Hence, as so often, the radical fringe has been able to shout the loudest, while more moderate voices go unheard.

What binds the corporations together is their love of Romantic kitsch. Before the débutants turned the first waltz, the ball room swelled with sonorous voices. Clasping their hearts, fraternity men of all stripes and lands intoned a 19th century student song: "Die Gedanken sind frei!"

See also The Balance of a Ball Night: Scandals, Lawsuits, and Violence