They Eat Horses, Don’t They? 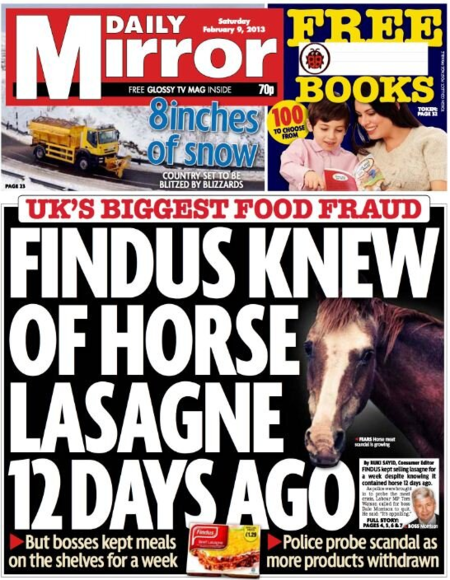 One of the attractions that the residents of the Slovenian capital of Ljubljana and informed visitors enjoy is a relatively unobtrusive stand in the middle of Tivoli Park in the city centre. At any time of day or night, you can buy an excellent, huge hamburger – made of horsemeat. It is a favourite spot particularly at the end of a late-night bender. Slovenes share a special fondness for horsemeat, as do the Italians, who represent the largest market in the European Union for this oddly textured, sweetish meat.

The scandal that broke out in the British Isles over horsemeat secretly added to hamburgers, lasagne and other foods can illustrate how the European Union is internally culturally divided – and how its control mechanisms don't work. The European Commission has said that the presence of horsemeat in products labelled beef is not a health threat. So besides the obvious implications of misleading consumers, the scandal mainly concerns the unconscious violation of social norms – since, in the United Kingdom and Ireland, the use of horsemeat is basically taboo. It’s probably as if an Orthodox Jew or strict Muslim ate a slice of ham in the belief that it was chicken salami.

The affair concerns post-Communist Central Europe, as over the last two years, Poland has overtaken long-time leader Italy in the processing of horsemeat in the EU. The third-largest producer of this food is Romania. In the European Union around 200,000 horses are slaughtered annually. Poland doesn't have enough certified slaughterhouses, so thousands of live horses are transported hundreds of kilometres in dismal conditions to facilities abroad.

According to the Polish Agricultural Market Agency, the export of Polish horses to Italy is growing. It's just not spoken about much in Poland, because the horse has a traditional and cultural standing, similar to that in Britain – as an inseparable friend and member of the peasant family and as the travelling companion of the once-famous Polish Hussars. That's why the history of the horse as a Polish export item is so interesting. In an attempt to acquire valuable foreign currency, the communist regime began to breed horses in the 1960s, and then found demand in France, Belgium, and Italy. Today, thousands of Polish farm families depend on the trade.

Austrians seem to span this cultural divide without blinking – what some see as a kind of "horse hypocrisy" – loving their Spanish Riding School and Fiaker on Vienna streets, yet also their Pferdeleberkäse, a pressed pate of horsemeat served on a Semmel at every Würstelstand. Still, overall consumption numbers are modest, only some 1,000 horses butchered as meat in 2011, according to Statistik Austria, and about 50 grams per person per year – putting Austria not even in the top ten EU horsemeat producers. Cultural historians trace this reluctance to the Catholic Church’s centuries-long prohibition on eating horsemeat, dating from the 8th century, and even though long-since lifted, the emotions endure.  This explanation may be too neat, however, as closer to the borders with Catholic Italy, the passion for horsemeat and breeding horses and ponies for meat only grows.

Even though Polish horsemeat has been suspected for a while, now it seems the meat that the British and the French consumed as beef was actually horsemeat from Romania. According to local inspection authorities, 25 Romanian slaughterhouses have certificates to butcher horses and export horsemeat to the EU. But Romanian Prime Minister Victor Ponta has protested the claim that this was some deception perpetrated in Romania. And he may be right. In the tangled chain that starts at the Romanian slaughterhouses, figure a Cypriot dealer, a Dutch supplier, the French company Comigel, and a Luxembourg factory producing the frozen product for the British daughter company of the multinational food company Findus.

The Romanian newspaper Ziarul Financiar has reported that Romania, whose inhabitants usually do not have as sentimental a relationship to their horses as Poles, annually exports horsemeat worth €10 – €12 million. With the difference between cheaper horsemeat and more expensive beef at around 1.5 euros per kilogramme (91 cents per pound), there would have been sufficient incentive to switch the two.

But the passion with which Romanian politicians launched into the defence of their businesses suggests that the Eastern EU members refuse to automatically play the role of the bad guy. After all, anyone in that convoluted supply chain could have been just as motivated as the Romanian producer.

However, seen globally, the European dispute about horsemeat is just a drop in the ocean, similar to many other problems. Horsemeat is the main source of meat for inhabitants of Central Asia, and the biggest market is China. Traditionally it is also eaten in South America. In the first eight countries of an imaginary table of horsemeat consumers, around 4.7 million horses are eaten each year. Those 200,000 Europeans are, compared with that, only a thin slice of salami.

Martin Ehl is foreign editor of the Czech daily Hospodarske noviny, where an earlier version of this article originally appeared, and winner of the 2012 Austria Press Agency-Bank Austria Writing for Central Europe journalism prize.